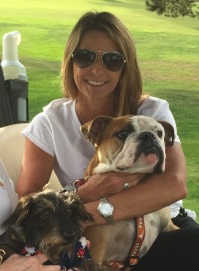 
Missy has been actively supporting the FACE Foundation since 2008, and has served as the Event Chair for FACE’s biggest fundraiser of the year, Bags and Baubles, for the last five years. Originally from Texas, she and her husband Phillip moved to Rancho Santa Fe in 2007. They have two sons, Duncan and Chase. They are avid animal lovers, and have a Siberian Husky and an English Bulldog named Claude.