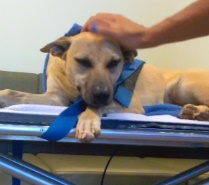 
This playful pup is “Zorra!” She was once a stray that walked up to a special family’s home and they claimed her as one of their own. A few months later, she sustained a serious fracture and it was determined she needed surgery to repair her broken leg. Zorra’s “mom” is a single parent of one teenager and owns a small business. Her income was not enough to pay for this life-saving surgery and it broke her heart to see her happy Zorra suffering. Before she was forced to make a terrible choice, she heard about FACE. Luckily, Zorra’s application for an emergency grant was approved and she quickly went into surgery with Save-A-Life partner Veterinary Specialty Hospital! Now she is back to being her care-free self with her adopted family who loves her very much