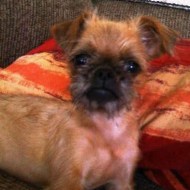 Sweet Pea received the surgery she needed on her fractured little paw, and her veterinarian expects her to make a complete recovery. She is doing great now, and is home resting and recovering. In six weeks’ time, she will be better than ever.

Bill, Sweet Pea’s adoring owner, was overwhelmed with gratitude when he learned that FACE was going to pay for her surgery, thanks to donors like you. He was silent for a long while before managing to say, “I can’t believe it. I just canít believe it. Thank you, from the bottom of my heart, thank you. You are angels.”

Sweet Pea is a six month old Brussels Griffon and the beloved companion of her owner Bill, a retired Navy veteran. Ever since Bill adopted Sweet Pea they’ve been looking out for each other. Bill met Sweet Pea when she suffered a serious leg fracture and her owner at the time was going to euthanize her instead of pursuing treatment. Even though Bill was personally struggling, he could not stand by and see this adorable little girl’s life end… So he took her in and spent what little money he had getting her leg splinted so she could get back on her feet.

As Sweet Pea slowly recovered from her leg fracture, she became a fantastic companion not only to Bill but also fit in perfectly with his other pets. Sweet Pea loves to run and play with Bill’s cats and brought an immense amount of joy and life into their home. The little group became a happy, loving family and Sweet Pea found her place in the world again.

Tragically, the other day during what should have been a joyful car ride Sweet Pea jumped out of the half open passenger side window will the car was moving! When she landed on the pavement the impact was so hard on her little body that she crushed all the bones in one of her paws. Bill’s heart was breaking to see her in pain and know that he can’t help her.

Bill himself knows what it’s like to go through difficult times. Two years ago, he suffered serious injuries and was hospitalized for months after a bad car accident. Just before that, he lost everything when his mobile home burned down in a fire. Despite these overwhelming life challenges, he always kept his spirits up, appreciating life all the more.

He is now desperate to come up with the funds to pay for the surgery to fix the numerous fractures in her tiny paw. For such a small dog, an injury like this is not only extremely painful, but also life-threatening. After his accident, Bill had a second chance at life, and now the thing he wants most in the world is to be able to give his beloved Sweet Pea another chance too. He even knows what he’s asking Santa for Christmas: a doggy car seat so he can keep her safe!