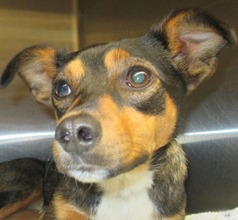 
“Sophia” is a sweet two year old Terrier who means the world to her “dad.” Sophia’s dad is a disabled veteran who had been homeless for over 16 years and recently got assistance with the VA to move into an apartment. Soon after, they recommended he get a companion service animal and he found his soul mate in Sophia. They were inseparable ever since the day they met. One tragic day, he left Sophia at home for the first time to go look for work and when he came back she was overly excited and slipped off the stairway when she ran to greet him. Poor Sophia broke her leg and he was devastated to hear how much the surgery would cost. He knew there was no way he could get that kind of money. He was lucky enough that a complete stranger had offered to pay for Sophia’s exam and diagnostics up until that point. To help him pay for Sophia’s surgery, the Veterinary Specialty Hospital suggested he reach out to FACE and we knew we had to help keep these two together. According to her dad, Sophia had “saved his life” and he said now it was his turn to save hers. With the help of FACE, that’s exactly what he did!

Special thanks to Enterprise for being a FACE Life Sponsor.