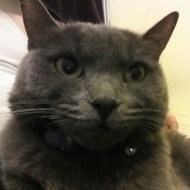 
It may have been April 1 but what happened to Saphira, a beautiful six year old Russian Blue cat, wasn’t an April Fool’s Day joke. No one knows what happened. Saphira and Lily, her cat buddy, were playing on the second floor patio of their home. Onyx and Angel, two doggie buddies, were busy inside the house. Somehow bicycles on the patio came down and Saphira was injured. Lily said it was Saphira’s fault and Saphira says it was Lily’s fault. We’ll never know and the dogs aren’t talking! Off to the vet where the diagnosis was an avulsion injury to Saphira’s lip. What’s an avulsion injury? It’s similar to an abrasion but worse. Layers of skin are torn away so underlying tissue is exposed. Surgical repair was necessary because the injury wouldn’t heal by itself. Untreated, there was risk of infection. And it is a painful injury.

Saphira came into Elizabeth and David’s life when a dog breeder said she had too many dogs and could no longer keep her. That was two years ago when Saphira was four years of age. Her human family was in the US Navy when they met on the same ship on active duty off the coast of . They’ve been married a year and their dogs and cats are their family. Many of us know how easily that can happen, right? By day, Saphira and Lily seem to go out of their way to irritate each other. By night, they love each other. If Saphira isn’t cuddling with Lily at night, she is cuddling with David. Anytime, day or night! When Elizabeth and David come and go from home, Saphira is there to greet them at the door. She absolutely loves catnip. If she says so herself, she goes crazy when it is nearby!

Saphira is recovering beautifully from her surgery and wants to thank FACE for helping her. Even Lily wants to say that she is glad her friend is healthy again. And no, she didn’t knock the bicycle to the ground!