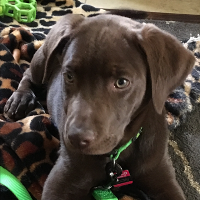 
Meet Rocki! Like most young labs, Rocki is an adventurous and playful pup. Unfortunately, her rambunctious personality got the best of her when she was playing outside one day and broke her leg. With two children and a young grandchild, Rocki’s parents were barely making ends meet  – they were devastated to hear that Rocki’s surgery would cost thousands of dollars which they just did not have. Thankfully, Save-a-Life partner California Veterinary Specialists referred them to FACE and together we were able to get Rocki the surgery she needed!