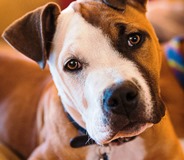 
“Rebel” was only a pup when he was adopted by his loving family from the Humane Society around this time last year. This Boxer enjoyed 3 wonderful months at his new home when he ingested something that he shouldn’t have and he became terribly sick. After days of vomiting, and having trouble using the restroom his concerned “parents” took him to Urgent Care and it turned out he needed emergency surgery to remove the foreign body in his tummy. His parents were in disbelief. Not a week had passed since another furry family member, their beloved cat, passed away at the same hospital. Not only were they emotionally recovering from that heartbreak, but they also had no savings since they had spent thousands in an effort to save their kitty. Luckily, they reached out to the FACE Foundation and we were able to pledge the amount needed for Rebel’s operation! Rebel’s young life was saved and he is still here to spread love and laughter with his adoring family.