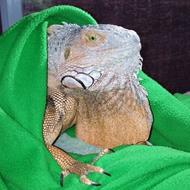 
Princess, who is actually a male iguana, found himself in a bit of trouble after he swallowed a bottle cap. His owner is a senior with very limited finances and Princess had been a constant companion for her since she adopted him in 2006. When he began showing symptoms of a foreign body, he was taken to the hospital where his owner was informed that he would need an invasive surgery in order to remove the bottle cap.

Without many resources, she turned to FACE for assistance. FACE was able to contribute toward Princessís surgery and his vets report that he was in excellent condition following the procedure. Princessís owner was extremely grateful and has even offered to volunteer with FACE to give back!