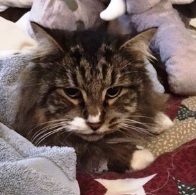 
This bashful boy is “Papas!” Papas and his pet parents were awaiting the arrival of their first baby when he came down with a severe urethral obstruction. Papas strained to relieve himself until eventually he was unable to urinate at all and was in a significant amount of pain. His parents were struggling to save before their baby was born and realized they would need financial help once it was decided Papas needed an emergency surgery. They felt terrible knowing that without treatment Papas would not survive, yet they knew that if they exhausted their savings they would have no money once their newborn arrived. Forced into a corner they were left with only one tragic option, and then they heard about the FACE Foundation from Save A Life partner San Diego Bay Animal Hospital. Overjoyed at the prospect of saving the life of their fur-baby, they applied for assistance and were approved for an emergency grant! Papas’ life was saved and now he will get to meet his future little brother or sister.