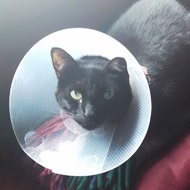 
Onkoku is one resilient kitty! His “mom” found an abandoned litter of kittens 7 years ago and she kept 2 of them. She bottle fed them until they grew up to be strong and healthy. Unfortunately for Onkoku, he was prone to urinary blockages. Eventually, he became completely blocked and after many different treatments failed, his owner dreaded the inevitable news that Onkoku would need emergency surgery or he would have to be euthanized. She could not bear the thought of parting with him, but she did not know how many more days Onkoku could last. She had recently lost her job and was in no position to spend thousands of dollars in addition to the hundreds she had already spent on the failed treatments. VCA Animal Specialty Group suggested she apply for a grant from FACE and at that moment her hope was restored. She gathered everything at once and was overjoyed to hear FACE would provide the funds for VCA to unblock Onkoku! This handsome cat gets to enjoy many more years of life!