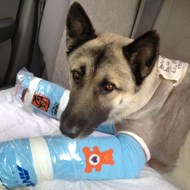 
What’s the definition of a bionic man? It is a human being whose body has been taken over by electromechanical devices. Malakai isn’t a human being and his orthopedic pins, plates, and screws aren’t operated by electricity but we think we can call Malakai a bionic dog! Here’s his story.

Malakai is a five year old German Shepherd mix who has lived with Lara, his human mom, since he was a puppy. When he was only nine weeks old, Lara and Malakai were on a walk and they were attacked by a large dog. The dog grabbed Malakai by the neck and while tossing him around, both of his puppy front legs were broken. When Lara was able to pull the dog off Malakai, she too was attacked. Because of the severe injuries to his neck, the veterinarian first believed that he would never walk again. Malakai recovered, however, and was quite proud of the titanium rods that were implanted in both of his upper forelegs. Life was good. Malakai and Lara went for long hikes together and he came to enjoy spending time in the ocean.

Fast forward to the summer of 2012. Lara was standing outside, talking with a neighbor, and Malakai was standing on furniture in front of a second floor window. He knows he’s not supposed to be on the furniture but he forgot! Malakai slipped, pushing the screen out of the window and falling two stories to the ground. This time the lower bones in both of his right forelegs were broken. Lara is a former member of the USMC and is now going back to school full-time.  The expenses associated with surgical repair of both legs were astronomical, and on her limited income, Lara couldnít afford the entire cost. She turned to FACE for help. And help was forthcoming. Malakai’s left foreleg has two pins in it and his right foreleg has a steel plate and twelve pins so the bone is fused to the ankle. Eventually he’ll leave the pins behind but the plate will remain. He can’t wait to go on hikes again and he’s heard about the benefits of water therapy so he can’t wait to get back into the ocean! Good luck to Malakai, the bionic dog!