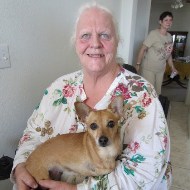 
When Barbara received a call from the President of the FACE Foundation about two years ago, telling her that she had the dog for her, little did Barbara know that she’d meet one of the friendliest and most loving dogs of her life. Barbara’s right leg had been amputated earlier due to medical reasons and Lucy, a four year old Chihuahua/Dachshund mix, had just lost her right front leg after a terrible accident.

Lucy’s plight had become known to FACE and the organization stepped in to help. Now Lucy needed a home and someone to love and care for her for the remainder of her life. Barbara describes Lucy as a people’s dog. Shortly before Barbara’s mother died, Barbara took Lucy to visit her. As soon as they walked in the bedroom, Lucy jumped on the bed and cuddled next to her. It was as if she knew her unconditional love would be welcome. Barbara’s mobility is aided with a motorized wheelchair and that’s where Lucy wants to be, 24/7! If she’s not sitting on Barbara’s lap, she’s running and playing. For some reason, Lucy’s right rear leg doesn’t touch the ground when she runs but she runs as fast on two legs as any other dog does on four legs! Like many small dogs, Lucy doesn’t know she is a small dog! In her home she also lives with a pit bull dog and she never hesitates to tell him what to do. And he listens and obeys!