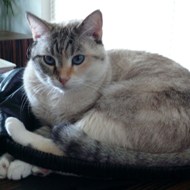 
Her name is Lippy but we could also call her Lucky. Why? Because Lippy, an eleven year old Siamese mix, survived a scary incident with a coyote and lived to tell about it. About 4:00 a.m. one morning in June, Yvette, Lippy’s human mom, heard what sounded like a cat fight. She ran to the window which overlooked their yard and yelled LIPPY! Then she ran downstairs and outside. She saw a coyote jumping over the fence. Lippy was pushed against the fence, hissing and bleeding from the mouth. When she arrived at the vet, Lippy was bleeding at the face and there was a bloody discharge coming from an eye. The globe of the eye was in tact but she had a mandibular symphyseal fracture or what we would call a fractured jaw. The fracture needed to be repaired surgically and that would be expensive. Lippy’s family had fallen on some difficult times. Yvette wrote, ‘I don’t know what I would of done had FACE not been an option for us. It truly was a blessing! I am just so happy that they were there for us and we still have Lippy in our lives’.

Lippy is doing great. She lives with a year and a half old black French bulldog whose name is Monkey. They are back to playing and chasing each other but always on Lippy’s terms. It took her a while to accept him in her life and her home but now she comes up and rubs all over him. Yvette said that she knows when Lippy has been loving on him because Monkey will have loads of white cat hair all over his face and body! Lippy had been an indoor cat until about a year ago when she started to go outside. She wore a sensor collar so she stays in her yard. In fact, the vet said that the collar might have saved her life because there were bite marks on it. Lippy’s excursions outside are now limited to the day time hours, and under close supervision, where she loves to sunbathe on the grass. She’ll sit for hours, staring at the small birds, hummingbirds, lizards and butterflies. As soon as it starts to get dark, she comes inside and the doggie door is closed. She may not be happy with this turn of events but better safe than sorry, right??! There’s fun waiting inside though because she loves to play hide and seek with Yvette. Yvette wrote, ‘If I know she is in one room, I will peek around the corner and as soon as she sees my head poking out, she will get this funny look and start to creep close, then chase me. She loves it!!!’ Last but not least, Lippy gives Yvette what she calls the ‘lovey eyes’. They are a dreamy look and Yvette knows that she is communicating her love.