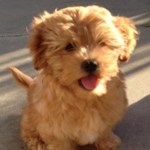 
Some of you may know Koopa as a fictional character in the video game series, Super Mario. We know Koopa as a gorgeous Maltese/Havenese mix puppy. Everyone knows that a baby gate is intended to confine a baby or a dog to one area of the house but that didn’t stop Koopa. One day in January when he was only four months old and when everyone in Koopa’s family was away from home, he managed to jump the gate. When his family returned home, they found him limping. Koopa’s left hind leg was broken and surgery would be needed to repair the leg.

Here’s what his human mom wrote before his surgery. ‘Koopa has grown to be a BIG part of our family in the short time we have had him and he is the first dog of our family. It breaks our hearts to see him without use of his left leg. Not once since the break has Koopa cried out in pain, barked or even whimpered…so we call him our ‘Koopa Trooper’. He still wags in delight when he sees us and he sure misses cuddling next to the kids.’ FACE stepped in to help and Koopa had his surgery.

Two months after his surgery (he has a screw implanted in his leg), Koopa is doing great. His favorite toy looks like a bird with a rope on the end. That’s fun but he really loves the kids in his family. They are twelve, eight, and one year of age. He loves to cuddle and to give doggie kisses. And he can’t wait for the baby gate to be put away because he loves to explore! Isn’t that what puppies are all about??