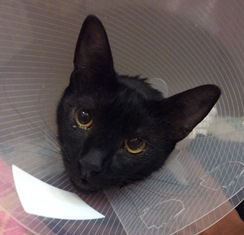 
Meet FACE Success Story “Jaxx!” This handsome little guy was rescued from the shelter by his family when he was a kitten and last year he found himself in need of FACE’s help. This scaredy cat got spooked from a loud noise and when he frantically jumped to get away, his leg got caught on some furniture and he sustained a painful fracture. Jaxx’s “mom” and his 10 year old human sibling were terrified of what this meant. They knew they wouldn’t be able to pay for the surgery, especially after Jaxx racked up a bill by staying at the vet overnight. His mom was unemployed at the time and just separated from her husband, who helped out with a few hundred dollars each month. Despair began to set in until they contacted FACE and their hope was restored. FACE was able to pay for Jaxx to get his surgery!