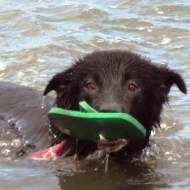 
Meet Jackson! Jackson is a beautiful, athletic, loving dog who provides comfort and affection to his ‘mom’, the wife of a US Marine stationed in Japan. Jackson suffered a fracture one day at the dog park, and has undergone 3 surgeries to correct the injury. Unfortunately, he recently began limping again, so his ‘mom’ took him back to the vet. The vet determined that Jackson would need to have his leg amputated if he had any hope of a happy, pain-free life. His owners were devastated; they had spent so much on his previous surgeries that they had nothing left to put towards the expensive amputation. They quickly began fundraising, but didn’t raise enough. Thankfully, they discovered FACE, who was able to help them. Jackson may only have three legs now, but that’s not stopping him from showering his ‘mom’ with kisses when she’s had a rough day! We are so glad our wonderful donors have helped us give Jackson another chance at happiness with his family.