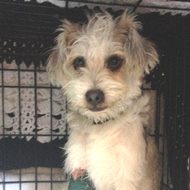 
It’s always nice to have friends in high places but if you are a rather small terrier mix whose name is Jack, you should think twice about jumping out of your human’s arms to the very hard tile floor far below! That’s what Jack did and as a result, he fractured his right forelimb. After arriving at the veterinary clinic, he received pain medication. X-rays confirmed the fracture. A splint was placed on the limb to stabilize it but his family was informed that when a fracture such as this happens in a small breed dog like Jack, the best chance of healing would be surgical repair of the limb. His family was financially limited and didn’t think that surgery could be an option. FACE stepped in and the rest is history.

Before we tell you how Jack is doing these days, we want to tell you how he came to live with his family. One night Nancy came home from work and there was this lonely, sad stray little dog, sitting by the driveway. A couple of days later, she spoke with their neighbor who lived on the other side of the fence who said that this little dog (whose name is now Jack) had also showed up unannounced at their door. No one claimed him so they thought they had a new family member. Well, Jack decided that with the choices he now had as where to live, he’d like to stay with Nancy. It was just meant to be! Only six weeks later, Jack had his accident when he jumped from high places. We are pleased to tell you that he is doing fine. He’s been taking it easy these past few months to make certain his leg properly heals but he’s happy that he can begin to play with Dixie, the other resident dog who is a one year old English Bulldog/Dachshund mix. Jack has promised everyone that he won’t jump from high places ever again.