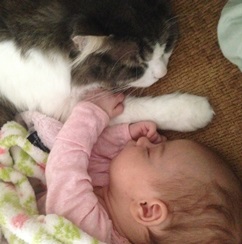 
This sweet boy is “Hercules!” Hercules is a gentle kitty who has been a part of his family for 5 fun-filled years. He was originally a stray kitten who wandered into their lives but he hung around and has been a guardian to their youngest family member ever since. If he goes outside at all, Hercules usually doesn’t leave their backyard. However, one day he did, and when he came back home he had a broken leg. His “mom” hated to see him in pain and wanted to do whatever was necessary to fix him. The surgery was going to cost thousands of dollars and she recently became a single-mother with no child support for her two children. In addition to reaching out to countless organizations for assistance, Hercules’ mom made a GoFundMe account in an effort to raise funds for the surgery. She was beginning to dread the decision she knew she would have to make if she couldn’t find a way to get Hercules his surgery. Luckily, the FACE Foundation had recently received a generous grant from the Charles & Ruth Billingsley Foundation with Wells Fargo and we were able to fund his surgery! Hercules got a second chance at life and gets to be around to watch his human siblings grow up.