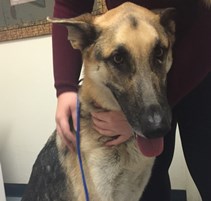 
“Harley” is a handsome and active German Shepard who loves going on adventures. One of his adventures, however, almost cost him his life. Harley and his Husky sister, Bella, escaped from their house late one night and after a long night of getting into mischief together they returned home in the morning before their “dad” even noticed they had escaped. His neighbors notified him of their grand escapade and it soon made sense why Harley was limping. He took Harley to the hospital and it was confirmed that he had a broken leg. Harley’s dad is a Marine who also takes care of his grandmother, whose health is slowly deteriorating and who raised him. After paying over a thousand dollars to get Harley stabilized and for overnight care, Harley’s dad no longer had any funds to go towards the emergency surgery that his dog desperately needed. He turned to FACE, heartbroken, and pleaded for help to save Harley. It was a good thing our Save-A-Life partner VCA Animal Specialty Group referred him to FACE! We are proud to announce that, because of the support from our generous donors, FACE was able to grant this family the money they needed to save Harley’s life.