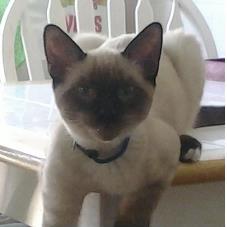 
This handsome Siamese is “Dexter!” Dexter is a rambunctious two-year-old who loves to play and has a big appetite. One day, this little guy ate a button and that’s when his problems began. His “mom” was terribly worried when he would not stop throwing up for two straight days. She took him to the vet and they decided Dexter would need to be treated overnight in hopes that the button would pass through his system. As much as his mom wanted to get Dexter some help, she could not afford the bill for Dexter to be hospitalized. She and her boyfriend worked part-time and were dependent on food stamps to survive. Devastated with the thought that she was going to lose her baby because of financial hardship, Dexter’s mom felt alone and hopeless. Luckily, the caring vets at Pet Emergency & Specialty Center advised her to reach out to FACE for help. Much to her relief, Dexter qualified for a grant and was able to get the treatment he needed to save his life!