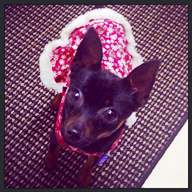 
“Daisy” is a happy-go-lucky Chihuahua mix who was living the good life until the day she broke her leg. Daisy’s family was juggling two household expenses because her “dad” was deployed as a crew member in Florida. The rest of the family was unable to move there with him because their youngest was dependent on the special needs care he was receiving here in San Diego. Daisy’s mom was bankrupt and she and her 3 children were living with her mother. Her financial hardships began when she was put on bed rest during her last pregnancy and lost her job. Things had been very difficult for her family since then. Having Daisy and 4 other rescue animals in the house helped a lot but now they realized they would not be able to provide for her the way they wished they could. They did not want to consider euthanasia. They reached out to friends and family but still came up short. Thankfully, they contacted FACE at the last second and we were able to help this family save their beloved Daisy!