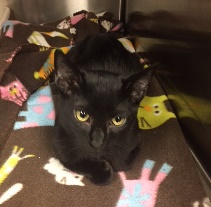 
“Cubby” is a happy, care-free kitty who loves his family dearly. After being rescued from the San Diego Humane Society, Cubby became very close to his eight year old human brother, a survivor of cancer.  Life was great until one day when Cubby started acting very different. He hid and cried out in pain when they tried to hold him so he was rushed to the vet. When the vet told Cubby’s family that he had a fracture and needed surgery they were heartbroken. They had no idea how this happened and now they were faced with a very difficult choice to make. As much as they wanted to help Cubby, they were already barely surviving on one income. Refusing to put their young kitty to sleep, they vowed to find a way to save him. Banfield is a FACE Save-A-Life partner and they referred this deserving family to FACE. Thankfully, FACE was able to assist with the cost of Cubby’s surgery so he could return home to the love and adoration of his family once again.