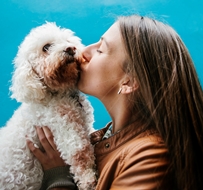 
Meet Coco! Coco is a 10 year old female Poodle Mix who is adored by her ‘mom,’ Ashley. Two years ago, Ashley became unemployed and in a bit of a financial bind. She was a full-time student prior to that, so her career experience was in the works. Coco is her best friend, and was a constant source of company for her during such a transitional phase. Coco unexpectedly came down with a disc issue that neither her nor Ashley were prepared for. A slipped disc was suddenly pressing on her spine and causing partial paralysis of her hind legs. Ashley found out that if Coco didn’t receive surgery within 48 hours that her paralysis would be permanent and euthanasia was a more humane option than letting her go untreated. Ashley was devastated. Due to her recent unemployment, she could not afford the full cost of the surgery that was needed upfront to save Coco. Thankfully, she reached out to FACE who was able to assist with Coco’s surgery. Now, two years later she is still doing well and enjoys spending time with her ‘mom,’ who is so grateful to FACE and is now a faithful volunteer.