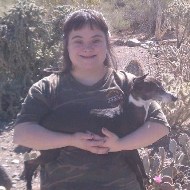 
Many animal rescue groups devote time, energy, and resources to providing new beginnings for animals who have been abandoned, relinquished, neglected or abused or who have been just left at local shelters. Charlie is a five year old Italian Greyhound who had been posted on Facebook by a woman who claimed to be a breeder. Laura, who already had two Italian Greyhound dogs, responded to the posting. Charlie was filthy, his nails were more than one inch long, his teeth were black, and he was lying outside on filthy towels next to two puppies. There was no heat and the concrete was cold. Laura immediately knew that she had to rescue him and save him from an uncertain future. Although she considered finding a new home for Charlie, she soon realized he would always be part of her family. Laura’s daughter has Down Syndrome and has become so attached to Charlie that she doesn’t let him out of her sight. She will sit and hug and pet him for hours and he loves it! In fact, Laura describes Charlie as ‘the best dog I have ever had.’

Early in May, Charlie was sitting on the couch in the family living room and suffered an unseen trauma to his right thoracic limb. Radiographic evaluation showed a distal right radius and ulnar fracture. Surgical reduction with a plate and screws was recommended with a good prognosis for him to return to normal function. Laura has some financial limitations and she turned to FACE for help. And we helped!

Charlie is now on the road to recovery and can’t wait to leave the split plaster cast behind! He’s generally a mellow guy but we hear that his energy level and enthusiasm for play is on the increase. Even though he enjoys playing tug of war with the other dogs, Charlie still thinks that cuddling in someone’s lap is the best way to spend the evening!