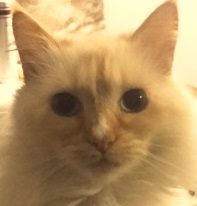 
“CeCe” is a beautiful two year old kitty who came under the care of her new family when her previous owners moved away and seemingly forgot about her. One day, CeCe was lounging in her front yard when the neighbor’s dogs escaped from their yard and attacked her. When her owner heard the commotion she came outside and was horrified to find CeCe being tossed between the two dogs. Poor CeCe had sustained wounds in her chest and had a broken leg. She was rushed to the hospital where her wounds were treated immediately but her owners could not pay for the surgery to fix her leg. CeCe was in a lot of pain and unless her owners did something soon she would have to be put to sleep. Her parents tried holding their neighbor’s financially responsible but they were not cooperating. CeCe’s “dad” was on disability and although her “mom” was unemployed, she had a job interview lined up that she had to miss due to bringing CeCe in for her emergency treatment. They felt so helpless until they heard about the FACE Foundation. Because FACE was recently awarded a grant from Lil Bub’s Big Fund through ASPCA, FACE was able to grant CeCe’s family the money for her surgery! CeCe recovered beautifully thanks to the help of Pearson Animal Hospital and is back to being her loving and radiant self.