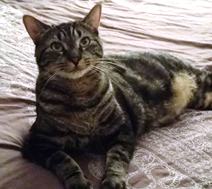 
“Buddy” is his “dad’s” best friend and they have traveled a whole lot together. Buddy’s dad moved to California a year ago from New York and was bouncing around between jobs when Buddy came down with a urethral obstruction. His dad poured his savings into overnight visits and catheter treatments to unblock his little Buddy. At first it seemed to help, but it was only a matter of time until he became obstructed once again. Buddy was in a lot of pain and finally became completely obstructed and the only way to save him was to get a surgery. His dad was beside himself with anxiety. He already had 3 jobs but he still could not afford the surgery, he didn’t know what else he could possibly do. When he heard about the FACE Foundation he had a glimmer of hope. He frantically applied for assistance and thankfully, FACE was able to pay for Buddy’s emergency surgery! It was a really close call for Buddy, and he would not be here today had it not been for the generosity of the Charles and Ruth Billingsley Foundation!