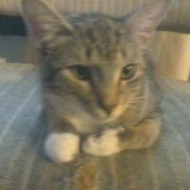 
When you look at a photograph of this sweet and pretty tabby, it won’t come as a surprise to you that her name is Bootsie. Check out those white boots on each of her paws! Less than one year ago, Lisa rescued Bootsie from a certain death and she’s been part of Lisa’s family since before her eyes were open. But if Lisa rescued Bootsie, it is fair to say that Bootsie has always been by Lisa’s side as well.

Diagnosed with PTSD, Lisa also suffers from unexpected seizures. About five months ago, Lisa suffered a seizure and when she regained consciousness, Bootsie was stretched out next to her on the bed, softly caressing her face, waiting for her to wake up. Bootsie has a doggie friend whose name is . Lisa describes him as reminding her of in the Broadway musical, Annie. was saved when Lisa found him wandering in the middle of a busy street. Bootsie and Eugene are best friends and can often by found sleeping side by side. One night in August, Bootsie managed to get out of her house. Lisa and her husband searched for her but without success. The next morning, Bootsie returned with a puncture wound and a fractured left hind leg.

Like many people, Lisa and her husband are struggling financially so they turned to FACE for assistance. We are happy to report that Bootsie is recovering at home and can’t wait to have the cast on her leg removed. She’s one of those felines who loves to play fetch and retrieve (furry mice are nice!) and that just isn’t possible when you have a cast on your leg. She said someone has to play fetch and retrieve because doesn’t have a clue as to what to do after he gets the ball. We know that Bootsie will be soon chasing furry mice and showing the rules of the game. Have fun, Bootsie!