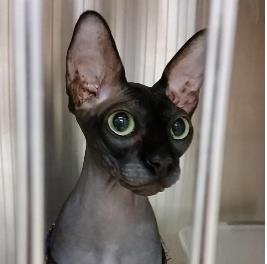 
Meet “Booboo!” This handsome little Sphinx was only a year old when he had to suffer the pain of a tail deglove. He had been out on a walk with his “mom” (Booboo actually enjoys being on his leash) when his tail was somehow clipped. His concerned owner brought him to the hospital and it was determined that Booboo was going to need a tail amputation to prevent an infection. His mom had just moved to San Diego from out of state and was not in a position where she could afford this costly surgery. She was living with her sister, and they were both on Social Security. Between the two of them they managed to pay for the exam and diagnostics, but it was a struggle. Luckily, they heard about the FACE Foundation and we were able to give this young kitty a second chance at life!