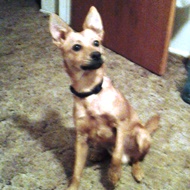 
Poor Batman was tragically hit by a car after escaping from his back yard. His frantic owner chased after him but wasn’t fast enough to stop him from running into the street. The driver of the car stopped his vehicle, and gave Batman’s owner what turned out to be a fake phone number. After borrowing nearly $1,000 from friends and family to get Batman stabilized/hospitalized/X-rayed, she realized she couldn’t save Batman on her own. Her pup needed extensive surgery to survive. Luckily, FACE was able to help this single mom, and with the talents of the veterinarians at the Specialty Hospital, Batman received the care he needed and his back at home where he belongs.