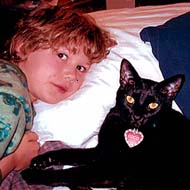 On November 30, the FACE Foundation received a frantic call from Deanna Lee.  Her cat, Coco,  swallowed part of a Christmas ornament.  Not just a family pet, Coco was the best friend and confidante of Lee’s 7-year-old autistic son.  The heartfelt story was picked up by several news stations.  Click here to watch CBS’ video, highlighting the dangers of the holidays to pets, as well as the bond between humans and animals.