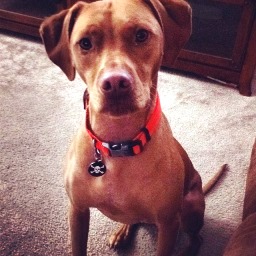 
Meet FACE Success Story “Zulu!” Zulu’s adventurous spirit recently got him into quite a bit of trouble. Zulu’s family was out for the day and he escaped from his yard and was either hit by a car or attacked by a coyote. Whatever he went through, he was in bad shape when animal control picked him up so they took him to the hospital. Zulu was hospitalized overnight and given medications by the time his family found him. In order to get their dog back from the pound Zulu’s family was told they would have to pay for his surgery to repair his broken leg. Zulu’s “dad” was a Marine and his “mom” worked as well but they didn’t have the thousands of dollars the hospital was asking for to move forward with Zulu’s treatment. They were heartbroken. They reached out to FACE and luckily, we were able to pay for Zulu’s surgery so he could be reunited with his family!