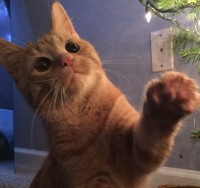 
Meet Success Story “Tucker!” As his “mom” puts it, “he was the cutest orange kitty I saw at the shelter and he’s been my buddy ever since.” Tucker and his mom moved to Encinitas after she graduated from law school in New Jersey. All of her time has gone to studying for her bar exam so she is unemployed with no income. When Tucker began vomiting continuously for 2 days straight she feared the worst and took him to be seen at the VCA North Coast Animal Hospital. She had to reach out to friends and family to pay for the tests and x-rays Tucker needed to be diagnosed. Her worst nightmare became reality when she was told Tucker had a foreign body and would need surgery to have it removed. She instantly knew she would be unable to pay for Tucker’s life-saving treatment. Without this operation, she would be doomed to watch her boy “suffer to the end of his life.” Luckily, Tucker’s mom was referred to FACE and we were able to grant them the money they needed to save Tucker’s life! Tucker is still here to cheer up his mom and keep her motivated for their future together.