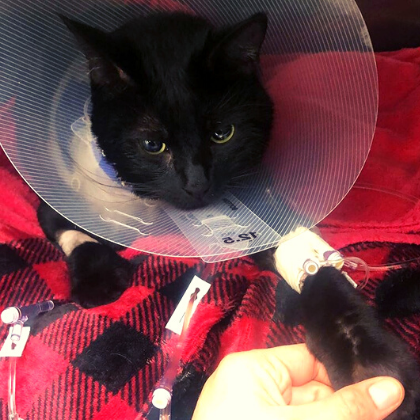 
Mio is normally happy and healthy so when he started presenting signs of stomach pain, his pet parents knew that something was wrong. They rushed him to Pet Emergency & Specialty Center in La Mesa where it was determined that he needed several days of hospitalization and a surgery. Mio’s time at the hospital was not easy… He had several setbacks, including three cardiac arrests. His family used their available resources to get Mio to a stable place, but after paying for the complications, they couldn’t afford the cost of the surgery. That is when they reached out to FACE for help. Thanks to Life Sponsor Howard Finkelstein and Lorin Legrant, we were able to approve support for Mio’s surgery. Mio is now back home where he belongs, with his loving family.

“Thank you for making sure he got his surgery and we were able to bring him home. We will forever be grateful.” – Mio’s Family