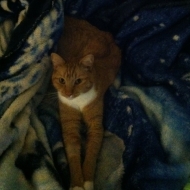 
Lilí Man Borum is a 4.5-year-old cat whose father, Nicholas, is in the Navy.  Lilí Man managed to break his femoral head, or the top of his femur.  Such an injury required surgery, but his parents were unable to pay for a reparative procedure.  Plaza Boulevard Pet Hospital referred the Borums to FACE, which then covered the majority of LilíManís expenses.  Lil’ Man is recuperating, and his family is elated that he will soon be back to his normal self!