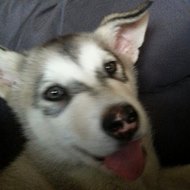 
Kovu is a big goofball and is sweet as can be! He belongs to a young man who serves in the Navy, and he’s truly man’s best friend! But one day, Kovu decided the couch was a chew toy, and shortly thereafter Kovu’s ‘dad’ knew something was wrong. He rushed Kovu to the vet and learned that his pup would need emergency surgery to remove the obstruction. He was devastated… he knew he couldn’t afford the entire bill on his own. Luckily, FACE was able to help, and now Kovu is back at home with his loving owner, who keeps a watchful eye over his playful pup.