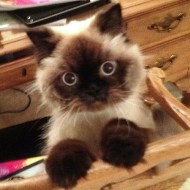 
Someone says they want to introduce you to Jean Pierre. You immediately think of a handsome Frenchman, right? Very debonair and full of joie de vivre. Someone who is elegant but who also loves to have fun. We’d like to introduce you to J.P., a two and a half year old Himalayan who is named after a man whose name is Jean Pierre. The brother of Michelle, J.P.’s human mom, Jean Pierre is a great guy who loves cats. Of course, Jean Pierre’s family also calls him J.P. so sometimes it gets confusing as to whether it is the man or the cat who is the subject of the discussion! Our story is all about J.P., the cat.

J.P. has lived with Michelle since he was a kitten. That was about two and a half years ago. Unfortunately, J.P. was diagnosed with lower urinary tract disease. The most serious problem associated with urinary function is urethral obstruction which means the cat’s urethra becomes partly or totally blocked. It is a potentially life-threatening condition because when the urethra is completely blocked, the kidneys are no longer able to remove toxins from the blood. The symptoms include straining to urinate, frequent attempts to urinate, and crying out in pain. With financial assistance from FACE, J.P. underwent PU (perineal urethrostomy) surgery. During this procedure, the wider diameter pelvic urethra is opened and sutured to the surrounding skin, creating a new permanent opening in the urethra.

J.P. says that’s enough of the medical talk. Too many intimate details for this Frenchman! Michelle says he is doing very well, playful, purring, exhibiting his own joie de vivre. One of Michelle’s friends describes J.P.’s personality as that of a ‘cat dog’. For example, those of us who have cats and dogs in our lives know that dogs generally like to ride in a car. Cats generally do not like to ride in a car. J.P. likes riding in cars and has even taken a plane trip. We know he’s a debonair Frenchman because we hear he also likes to dance. And when you look at his photo, you know he’s just about the most handsome Jean Pierre whom you’ve ever met!